Greek wine – and why it’s so good

We sing about Greek wine, but very few people know how good the wine is. Many remember the resinous retsina from a vacation in Greece and the house wines that are served here and there in most restaurants tend to disappoint. That’s why I set out to discover Greek wines on virtual wine tastings and wine trips to Greece.
Viticulture has a long tradition in Greece and the wines from the Mediterranean region are constantly receiving new quality and taste awards. In this post you will find out everything really worth knowing about the often too negatively portrayed Greek wine!

Divine traditions in the cultivation of typical Greek wines

Wine is the drink of the gods – Greece is the longest wine-growing country in all of Europe. Long ago, Greeks made wine by pressing grapes. In ancient Greece, wine was regarded as a divine drink, which the earth owes to the god Dionysus. By enjoying wine it is possible for people to get closer to the gods. Between the 15th and 19th centuries, the country on the Mediterranean was made up of Turkey, which imposed a ban on wine in the country. This could only be lifted again in 1830. Since then the traditional pressing of Greek wine has been resumed and improved from year to year. Today the wines are made in a very professional and high quality way.

The versatility of Greek wines 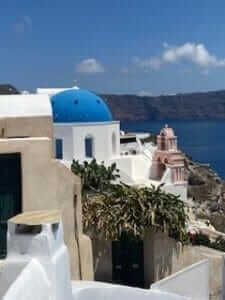 Greece is a diverse country in many areas: Geographically, the country is maritime characterized by the many large and small islands on the Mediterranean; In addition, the country also has a high proportion of mountains. This incomparable variety of soils and altitudes has a strong influence on Greek wine. The soils of lime, volcanic rock and granite paired with the Mediterranean and maritime climate and the many hours of sunshine in Greece represent a very good basis for the cultivation of wine.
Due to the diversity of nature, there are many different grape varieties in Greece. Greek wine is vinified from different vines from different soils and thus achieves a very special diversity. The weather also plays a role here: The south of the country is very hot and dry, which means that the vines get a lot of sun and can be harvested as early as August. In the north of Greece it looks different: the often cool and humid climate delays the harvest of the grapes until autumn. Despite these large climatic differences, Greece is ideally suited for viticulture due to its geological location.

Who would have thought? About half of the 110,000 hectares of vineyards are only used for the production of Greek wine. The remaining grapes serve as table grapes or are processed into raisins.
A large part of the growing regions of Greek wine are on the coast of the country. The Ionian and Aegean Islands are among the best wine-growing regions in Greece; in addition to the Peloponnese, Macedonia and Crete, this also includes Thrace. In this region, an average of 50,000 hectoliters of wine are produced each year. The grape varieties grown here are currently dominated by French wine: varieties such as Chardonnay, Sauvignon Blanc or Cabernet Sauvignon are grown in this area. Nevertheless, autochthonous varieties often have the upper hand in the cultivation of grapevines.
The large and mountainous region of Macedonia is best known for Greek red wine. Four of the 25 Greek wines awarded the highest quality mark come from this region. The Nemea region is particularly known for high-quality wines.

The grape variety of Greek wines

In Greece, a large number of grape varieties are mined for wine production and autochthonous varieties dominate the cultivation.

Agiorgitiko is one of the oldest grape varieties in Greece and is often considered the finest indigenous variety in the country. The red grape variety often results in fruity wines, which often have a strong but gentle tannin structure.
The red variety Xinomavro from the north of the country is known as the finest of the Greek grape varieties. The character of the wines made from Xinomavro vines is often reminiscent of Nebbiolo.
The autochthonous red grape variety Mavrotragano is best grown on the volcanic soils of Santorini. The wine from these vines has a strong and almost fiery aroma and is becoming more and more stout and more successful in Greece.

Assyrtiko is the dominant white grape variety on the island of Santorini; but is also grown successfully in Halkidiki, Epanomi, Drama, Pangeo and on the Peloponnese. The grape variety has a high acidity and retainsthis even when the vine has reached full maturity.
The almost extinct white grape variety Malagousia has played an increasingly important role in the cultivation of high-quality Greek wines since the mid-1990s. The vine is mainly grown in Macedonia, but can also be found in Attica and the Peloponnese. Elegant wines with a full body, medium acidity and exciting aromas that are reminiscent of citrus fruits, jasmine and herbs can be obtained from this particularly aromatic variety.
Savatiano is an important white grape variety for the famous resinous Greek wine retsina. The wine tastes a bit sour and bitter due to the addition of pine resin during fermentation.

Convince yourself of the opposite of the clichés: Greek wines are great! 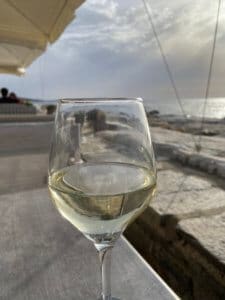 Due to its tradition and geographical location, Greece is an ideal country for viticulture. There is only one way to convince yourself of the specialty and uniqueness of the wines: Try good Greek wine! We often offer virtual wine tastings with excellent Greek wines and we have a large selection of good Greek wines from various winemakers in our online shop. From time to time we even organize wine trips to Greece to let everyone participate in the good taste of Greek wines. Choose something and let yourself be enchanted by the good taste of Greek wines!

The best wines for Christmas and New Year’s Eve
22. November 2022

Our wines
Go to Top